They perform magical transformations amid toy dinosaurs and menacing dolls and leave one wondering: Why do their whimsical environments prompt the painter’s choreography of divine frenzy? Is their movement a metaphor for hidden impulses inside them, impulses unrelated to time and space?

Such questions come to mind when visiting Hatch in her studio. Paintbrush in hand, the artist was placing finishing touches on her latest work, “Queen of the Tropics.” It is one of 18 oil paintings she will exhibit at Saugatuck’s Joyce Petter Gallery, 134 Butler, through October 30.

For the show, Hatch has compiled paintings she has completed since 1984, gleaning them from New York, Chicago and Ann Arbor galleries where she is represented. Simultaneously, Hatch will be showing 3 paintings at Calvin College Center Art Gallery in Grand Rapids from Wednesday through Nov. 16.

She calls the paintings she is showing “comprehensive body of figurative work.” Indeed, they comprise a treasure trove of multifaceted images. Through color periods and rich textures, the whimsical images emerge in fantastical domains. And often, what lies beneath is more revealing of the artist’s flights of fancy.

Her painting styles and premises over the years, Hatch sums up as “figurative.” Actually, she said her work doesn’t fit in any definitive category. She’s right. “Contemporary realism” is too narrow a term for her congestions of inexplicable detail. “Surrealistic” might apply to those leaping figures and distorted scale, but her precision-tooled geometric floors are much too solid to melt like Dali’s watch. Another equally important element is color. Lately, Hatch has been experimenting with getting “jewel-like deep colors and rich Renaissance” reds, rusts and browns.

“I reached a point where I wanted to start using dark colors to get more contrast and depth to the color, she explains. “It’s almost like gritting your teeth sometimes. I wanted the blue to be a beautiful, brilliant blue but also be as dark at the same time.”

In such recent paintings as “The Ancestors,” “The Sitter,” “A Quiet Life,” and “The Bride’s Day Off,” Hatch has achieved that Rembrandt-high-key effect with stark whites juxtaposed beside mixtures of acra-red-tinged – ultramarine blue.

Why the change? “I want to surprise myself more,” she says “That’s a big element for me- to keep myself interested. That’s my goal in life.”

While mixing new colors is one avenue of enchantment, which she calls the reason “you do all the other work,” Hatch says the main element of her compositions, the figure, will always be the linchpin of her whimsical unsettling images.

Hatch recalls learning her paint-dabbing techniques as a teen while taking painting classes at the Battle Creek Art Center and honing her skills for two years while attending Kingswood School at Cranbrook Academy of Art. Somewhat serious about art, Hatch continued to refine her talent as an art major at Skidmore College in Saratoga Springs, N.Y.

She calls her painting career an evolving process. Her interest in figurative painting was sparked when Hatch enrolled in a professional workshop at the art institute with a famous Buffalo, N.Y. artist Harvey Breverman.

At the time, Hatch says, figurative painting was not being taught, shown or discussed by critics because abstract expressionism was the artistic cynosure at the time.

After working out the painting in sketches with faces and figures drawn in, Hatch begins the under painting, establishing the color relationship until it “sort of clicks.” Once Hatch has the mood that conveys what she is feeling, the paint becomes a conduit of her unconscious thoughts and emotions.

“When I’m painting, the ideas always come in the form of pictures,” she says. “I will know for some reason that I want a figure in a certain position-I don’t know why-I just know that. Then I start developing it and other things begin to develop around it so it’s like a little narrative.”

Some of the stories resonate with childhood memories, souvenirs of motherhood, romance, and even New York City streets. The story, however, is more of a psychological melodrama; a poem of questions. Clues to a mysterious puzzle that the viewer must put together and solve.

Her subjects can be faceless people. They can have their backs turned and they can even be standing quite still and somehow, there is always an inner movement. Or is it another manifestation of the psyche?

The artist poses her compositions as what she calls “puzzles which depict the human condition:” sequences of reality and the supernatural all rolled into one. “You know how it is when you have a dream, your mind takes all of these events, objects and people, etc. and it turns it into a sort of visual narrative,” she says.

Expect no answers or happy endings. As Anton Chekhov once said, “An artist isn’t obliged to solve problems, only to state them correctly.” 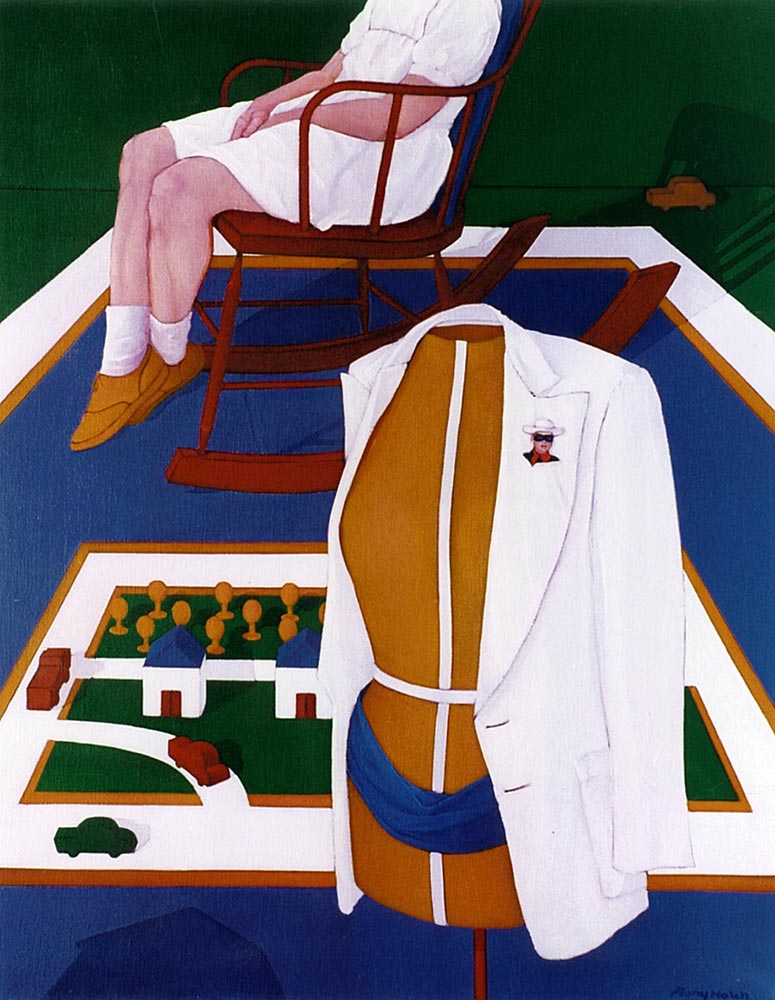