Kalamazoo artist Mary Hatch’s most recent paintings are electric with new synthetic colors and increasingly enigmatic. With symbolic language, they seem to portray her life this past year and how the Gulf War registered on her subconscious.

There are 13 paintings in her current show in Gallery II at western Michigan University. They will be up through Feb. 25.

Hatch started the first painting in this show Jan. 16, 1991, just hours before the war in the Persian Gulf began to unravel on the evening news.

“My painting seems to be a combination of internal and external events filtered through an obscure process and emerging as a visual narrative,” she writes in her gallery notes. “The paintings are the result of responding to everyday events, some dramatic, but most quite ordinary.”

Hatch’s choice of color, however, seems to lend an uneasy and often ironic dimension to even the most ordinary event. A Dick Tracy-type man appears in four paintings wearing a glowing yellow trench coat and matching hat. While yellow is usually associated with sunshine and happier times, our hero is usually seen brandishing handguns and a rifle.

Hatch is a master at using color to evoke mood and meaning, “Color is very important to me,” she says. “When I start a painting, I establish both the drawing and color immediately. Color sets the emotional tone of the painting.”

“The Garden” shows two young women, one wearing shorts, the other in a dress, walking away from flamingos in a Florida-type setting with water and palm trees. A normal-enough scene, but virtually all the colors are variations of a single green and crimson, whether they are tints, shades, or mixtures. Because of the hothouse, enclosed feeling of the color, it seems the women are trying to walk away from this idyllic but limiting landscape.

Six of the works are quite large, ranging from approximately 3 square feet to 4 by 5 feet. All except one painting portray either a couple or a single figure.

“It isn’t interesting unless it has a figure,” Hatch says. “Nothing else interests me. I can make any kind of statement through the figure.”

Hatch does yoga and has long been a dancer. She feels both dancers and figurative artists have in common “a heightened awareness of the human body and its ability to communicate endless levels of meaning through the slightest gesture or movement.”

At first glance, it seems there are incongruities between her words and the figures in these paintings. With the exception of three paintings, the majority of these figures seem strangely static and non communicative in their standings and sitting postures.

But, in fact, their frozen postures can be read as symbolizing the lack of human action in the televised version of the Gulf War, which focused on the high-tech aspects of computerized warfare.

Unfamiliar, non-human creatures also fill these new paintings-lizards are present in five; lions are in four; angels in three; and flamingos in two. And there are the guns, feeling real but often colored as if they might be toys.

Superficially, the strange creatures seem innocent enough. The lions appear to be stuffed toys on wheels. The small lizards are worn decoratively as necklaces, and the larger ones seem to have collars and leashes like pet dogs. Yet often the large scale and locations of these creatures make them seem ominous.

In a way that defies logical explanation, all the things in a Hatch painting seem to relate to each other and all the paintings seem to fit together. Perhaps this comes from her method of working.

“Part way through the painting,” she says, “an idea for another painting will start forming in my mind. If it stays, I know I’m stuck with it. I usually have two paintings under way at a time. I don’t get into a situation where I don’t know what to paint.”

While Hatch may know what she’s painting, it takes a while for the viewer to decipher it. But add it up: the static positions of most of the figures, the ominous guns and creatures, the unnatural colors, and the brittle, lined smile of the woman who appears to be Hatch herself in the painting “Her Favorite Necklace.”

It seems we do not have a very psychologically pretty portrait of the past year. Yet Hatch has created a very strong body of work that comprises this portrait. The show is definitely worth seeing.

A perfunctory look at Mary Hatch’s paintings might give the impression that they’re simplistic narrative depictions of idyllic Americana-except that her palette is as lurid as a half-page headline in the New York Post. Bilious green and intestinal pink are juxtaposed: it should, by rights, make you want to vomit. Instead Hatch makes the lurid lyrical, turning our conceptions of what’s ugly and what’s beautiful topsy-turvy. That unlikely palette combines with her surreal subject matter to draw you in as surely as a murder mystery. The morbid details both fascinate and repel, but you can’t put the work down. And once you look twice at Hatch’s paintings, you can’t stop looking. Things are not only not what they seem, they’re as inevitable and inexplicable as the images in our collective unconscious. The sickly greens and reds, the glaring yellows and oranges are all saying something more than what the people in her silent tableaux can express.

At first glance the people populating Hatch’s paintings look ordinary. They could be your next-door neighbors or your office mates. But many of the objects that surround them are quite extraordinary-or extraordinarily out of place. The uncharacteristic colors give everything the unreal quality of a dream, making anything seem possible. Foreign objects are likely to become familiar, and common objects take on uncommon import. Because the people in her paintings are so mundane, so true to life, their silent messages seem even truer. The figures in her paintings usually face the viewer, their gazes often confrontational. It seems they’re about to deliver some kind of message, some kind of oracular truth. At first you might assume that the message will be something as placid as their poses or as mundane as the things surrounding them. But suddenly you realize that in their arrested postures these figures are like mediums, transferring subconscious messages as boldly as Hatch’s colors do.

Take “War Games.” Five chubby smiling babies on a blanket, and two more cut off by the frame. How Norman Rockwell. But then you notice their vacuous faces-and that the blanket they’re sitting on is the American flag. Suddenly their toys and clothes seem symbolic: the uniform gray they wear, the relish with which one chomps on a helicopter. These cherubic but somehow threatening babies are going to grow up, girls and boys alike, to be soldiers and generals. Among the blood-red toy jeeps and tanks are Red Cross trucks-and suddenly those two babies cut off at the top seem corpselike, casualties of war. These young innocents staring out fresh fodder “for God and country” remind us of our own powerlessness to stop the machinery of war. A bright red ribbon runs horizontally in front of the babies, separating them from the viewer as if they were a museum exhibit. Or is it a trail of blood, the thread of history?

“The Garden” also presents us with an exotic rendition of an apparently commonplace subject. Hatch makes those ugly pink plastic lawn flamingos gorgeous: real birds once again, their long necks elegantly extended toward the ground or held regally upright as they walk on the carefully kept grass-or in the wild swamp water in the distance. The branches suspended over the sandy bank have an unkempt, overgrown look. This is not your average tended garden, where the “flamingos” are as artificial and out of place as the materials they’re made of. The two birds in the foreground here look as natural in their environment as the two women that frame them look foreign.

The women in “The Garden” are like eccentric bookends, one too static to be anything but a statue, the other a cartoon-like blur. Perhaps the entire scene has been conjured up by the staid woman-a fantasy of her wild self, what she could be or would like to be. The running woman’s blond hair seems swept back by the wind, and a respectable bowler hat has half blow off her head; she wears an absurd necklace of leaf-like shapes. Her clothes are comfortable but stylish and expose her legs. The other woman wears a long green dress as stiff and straight as a corset, but with none of that garment’s sexual connotations. Is the statue-like woman about to rebel at the confinement of her garden and turn into her more active counterpart? Or are they two separate and rivalries creatures? Again, the many questions the work raises are what make it so rich.

In “Guarding the Guardian,” a rusty red life-size angel hovers behind a couple wearing clothes like uniforms. Is it “real” about to appear to them-or only visible to the viewer? Is it the guardian angel they would like to have, which would solve all their problems? Is it apocalyptic? Invisibility protecting them? The man wears a sort of necklace with a totem-like animal on it. The woman holds a dancer-like figure in her hand; its foot, raised to waist level, is attached to its hand. Is it crippled, mutant, or simply an agile acrobat? What do these charms mean?

In “Return of the Angel,” the seraphic image is in blue and hovers once again behind a couple who face one another but are separated by a cat as mysterious as a sphinx on a red armchair between them. In a number of paintings Hatch imposes totemic animals-lizards, dinosaurs, lions-in unexpected places: as decorative pins, unwieldy ties, chokingly large necklaces. These unlikely monsters seem to lead the puppet-like people into war in such paintings as “The Reluctant Gunfighter,” “The Warriors,” “Toy Soldiers,” “America Remembers.” The animals are like keys to Hatch’s psyche, and once you have them her paintings begin to open up-but they yield an embarrassment of riches, of questions and answers and more questions likely to turn you into a glided, lonely Croesus.

In “Madonna,” a contemporary-looking icon stands before the door of her house (painted a bright blue, like the color of David Hockney’s swimming pools). A flag peeps from the barely opened door, and in the background the idyllic landscape includes a large shade tree and a car parked beneath it; there’s another tidy house in the distance. Suddenly the woman’s patriotic innocence becomes suspect-you notice that the house has an odd wire frame before the door and a blood red shape inside it, above the hint of a flag. This pale schoolgirl with her blood red clothes and bangs, dripping like trails of blood down her forehead, an odd red splotch next to her eye, could be a modern day Lizzie Borden. The blue house could hide morbid secrets. The electric blue X crossing the girl’s jacket, though it suggests the straps to a bookbag, is also reminiscent of a straitjacket. The shadows on the building’s walls begin to look menacing, skeletal-two of them on the door could be macabre figures dancing. Or maybe this is just a girl with a red rubber band in her palm, the proverbial “string” tied around her finger to remind her to close the door.

Too many questions, too many possibilities for interpretation. Yet Hatch’s paintings have the same lure as psychoanalysis-discovering what makes us tick. And unlike the mystery thriller that leaves you feeling intellectually cheated though you’ve read it from cover to cover till dawn, Hatch’s paintings don’t make you feel shortchanged. Her arrested figures speak the unspoken and the unspeakable, her images contain your innermost thoughts even when you can’t identify in words what she’s expressing for you. You feel only that these are not just the artist’s ideas but somehow-inevitably, irrevocably-yours too. 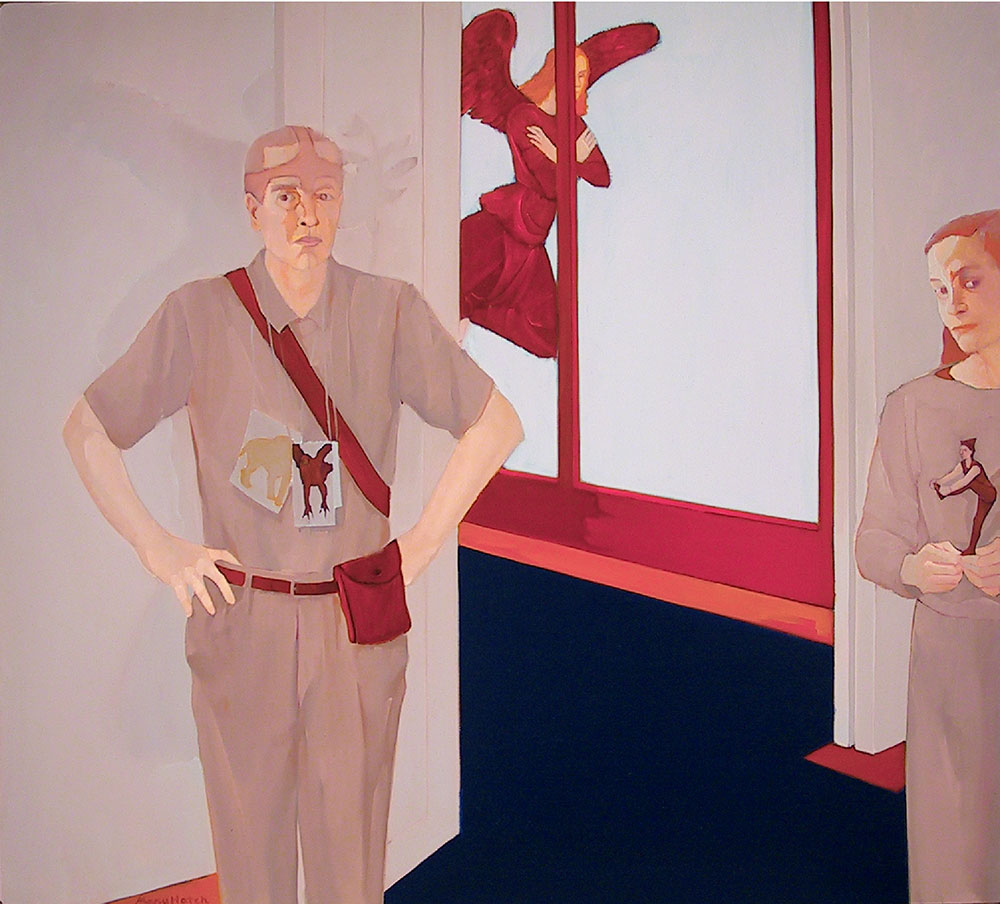