Kalamazoo artist Mary Hatch’s most recent paintings are electric with new synthetic colors and increasingly enigmatic. With symbolic language, they seem to portray her life this past year and how the Gulf War registered on her subconscious.

There are 13 paintings in her current show in Gallery II at Western Michigan University. They will be up through Feb. 25.

Hatch started the first painting in this show Jan. 16, 1991, just hours before the war in the Persian Gulf began to unravel on the evening news.

“My painting seems to be a combination of internal and external events filtered through an obscure process and emerging as a visual narrative,” she writes in her gallery notes. “The paintings are the result of responding to everyday events, some dramatic, but most quite ordinary.”

Hatch’s choice of color, however, seems to lend an uneasy and often ironic dimension to even the most ordinary event. A Dick Tracy-type man appears in four paintings wearing a glowing yellow trench coat and matching hat. While yellow is usually associated with sunshine and happier times, our hero is usually seen brandishing handguns and a rifle.

Hatch is a master at using color to evoke mood and meaning, “Color is very important to me,” she says. “When I start a painting, I establish both the drawing and color immediately. Color sets the emotional tone of the painting.”

“The Garden” shows two young women, one wearing shorts, the other in a dress, walking away from flamingos in a Florida-type setting with water and palm trees. A normal-enough scene, but virtually all the colors are variations of a single green and crimson, whether they are tints, shades, or mixtures. Because of the hothouse, enclosed feeling of the color, it seems the women are trying to walk away from this idyllic but limiting landscape.

Six of the works are quite large, ranging from approximately 3 square feet to 4 by 5 feet. All except one painting portray either a couple or a single figure.

“It isn’t interesting unless it has a figure,” Hatch says. “Nothing else interests me. I can make any kind of statement through the figure.”

Hatch does yoga and has long been a dancer. She feels both dancers and figurative artists have in common “a heightened awareness of the human body and its ability to communicate endless levels of meaning through the slightest gesture or movement.”

At first glance, it seems there are incongruities between her words and the figures in these paintings. With the exception of three paintings, the majority of these figures seem strangely static and non communicative in their standings and sitting postures.

But, in fact, their frozen postures can be read as symbolizing the lack of human action in the televised version of the Gulf War, which focused on the high-tech aspects of computerized warfare.

Unfamiliar, non-human creatures also fill these new paintings-lizards are present in five; lions are in four; angels in three; and flamingos in two. And there are the guns, feeling real but often colored as if they might be toys.

Superficially, the strange creatures seem innocent enough. The lions appear to be stuffed toys on wheels. The small lizards are worn decoratively as necklaces, and the larger ones seem to have collars and leashes like pet dogs. Yet often the large scale and locations of these creatures make them seem ominous.

In a way that defies logical explanation, all the things in a Hatch painting seem to relate to each other and all the paintings seem to fit together. Perhaps this comes from her method of working.

“Part way through the painting,” she says, “an idea for another painting will start forming in my mind. If it stays, I know I’m stuck with it. I usually have two paintings under way at a time. I don’t get into a situation where I don’t know what to paint.”

While Hatch may know what she’s painting, it takes a while for the viewer to decipher it. But add it up: the static positions of most of the figures, the ominous guns and creatures, the unnatural colors, and the brittle, lined smile of the woman who appears to be Hatch herself in the painting “Her Favorite Necklace.”

It seems we do not have a very psychologically pretty portrait of the past year. Yet Hatch has created a very strong body of work that comprises this portrait. The show is definitely worth seeing. 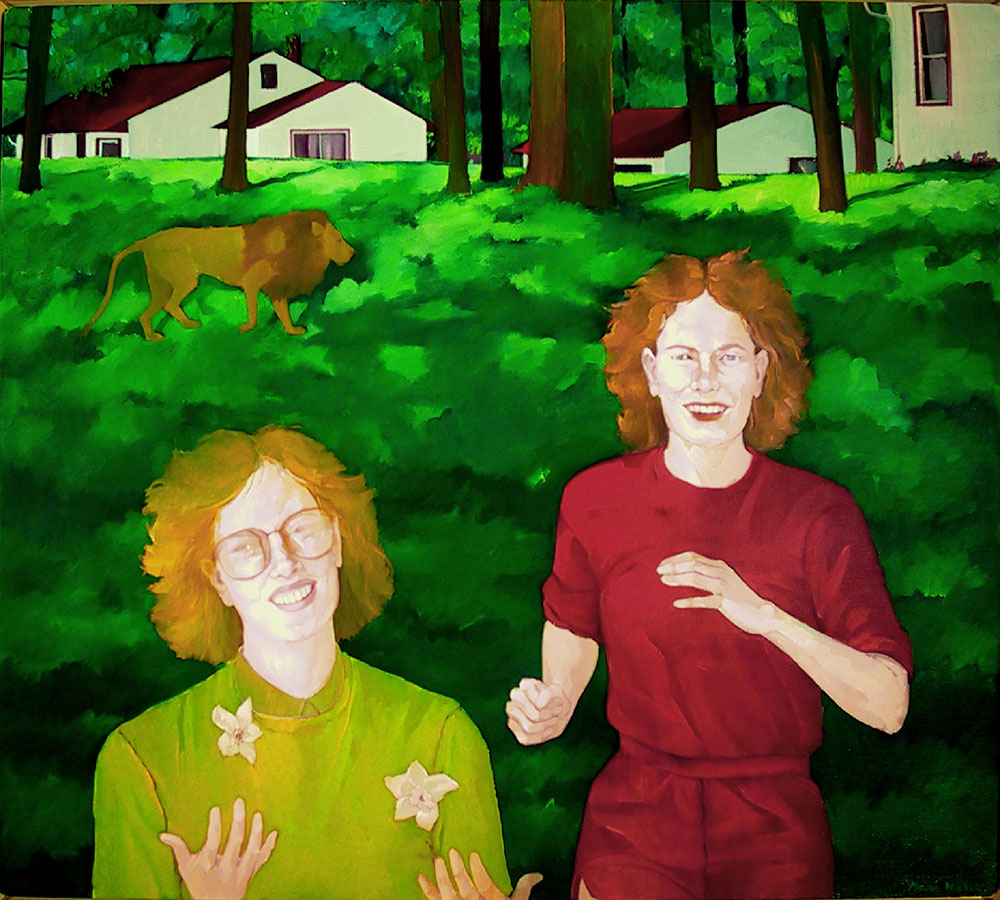